Get to Know “Snake Jailbird” 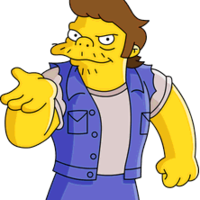 Part of the story of Old Joliet Prison is its abandonment.

In 2002, the Prison was closed.  You saw some use from the State of Illinois, some filming (such as Prison Break), and sometime after that – it was just a building surrounded by barbed wire.

The buildings began to fall into disrepair, from painting peeling to structural issues (which is why some buildings are still off-limits to the public, and why fundraisers like the Great Joliet Prison Break happen).  During that time, there were many times where people would illegally trespass onto the land.

Many times, there were vandals with spray cans in hand (many “interesting” works of art have been removed).  Other times, acts of arson occurred.  We’re not condoning the acts that occurred.  It’s all part of the history of the Old Joliet Prison.

So, why are we talking about a character from The Simpsons?

Snake Jailbird (usually referred to as simply Snake) is a recurring fictional character in the animated television series The Simpsons, who is voiced by Hank Azaria. Snake’s first appearance was in the episode “The War of the Simpsons“. His catchphrase is “Bye!”, which he usually says when he is in trouble. His real name is Albert Knickerbocker Aloysius Snake, although a Simpsons card says his name is Chester Turley. He was named the 19th (out of 25) of IGN‘s Top 25 Simpsons Peripheral Characters.

Now, inside the cafeteria of the Old Joliet Prison, there is some graffiti.  And, this is why we wanted to introduce you to Snake Jailbird.  The cafeteria will be opened to the public during The Great Joliet Prison Break-In and on some of the prison tours.  We’re only going to show you Snake, but he isn’t the only Simpsons character inside the prison.

Make sure to get your tickets for The Great Joliet Prison Break-In, which is TOMORROW, Saturday, August 24, 2019.  The event takes place from 4pm – 11pm, featuring The Ides of March, The Nikki Hill Band, Great Moments in Vinyl and Hot Mess.  Find out more about the event, and get your tickets today, at https://www.jolietprison.org/the-great-joliet-prison-break-in/.

Photo credit:  Low-resolution of Snake Jailbird from Wikipedia.com.  Image is used under fair use to help introduce the character that is pictured in the artwork at Old Joliet Prison.